The franchising community is mourning the passing of Kurt Illetschko, who dedicated his life to the promotion of franchising and was a founder member of the Franchise Association of South Africa. Our condolences go to his family from all at FASA and from all who knew him.

Kurt once described himself as a ‘franchise evangelist’ – a testament to his unwavering belief and support of this incredible business format that introduced a new way of doing business. Kurt was its champion, its scribe and its gatekeeper. 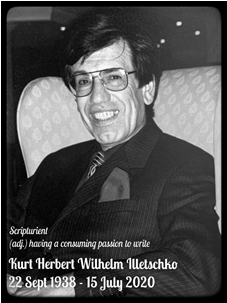 Kurt entered the world of franchising in 1975 as a franchisee, developed into a franchisor and eventually became a franchise consultant. His involvement with the Franchise Association dates back to its inception and he served on its Board of Directors for many years and then continued to tirelessly promote the benefits of ethical franchising, giving generously of his time to engage with people at seminars and franchise events.

He was fanatical at keeping records of FASA’s achievements and documented FASA’s journey in the book ‘Franchising in South Africa: The Real Story’ written in conjunction with franchise stalwart Eric Parker.

“My first encounter with Kurt,” says Eric Parker, “was when I joined KFC and was told that part of the marketing directors’ job was to represent them on the Franchise Association’s Council. Our first meeting was at Kurt’s humble home in Hillbrow around a small dining room table. That was the start of a lifelong friendship and business partnership. Kurt wrote about, spoke about and dreamed about franchising. I don’t believe there will ever be another person with Kurt’s knowledge and enthusiasm for franchising.”

Kurt researched and wrote prolifically on franchising and worked with many franchise companies in developing their operations manuals. Until recently he worked with former FASA Chairman Tony da Fonseca of OBC Better Butchery. “I had the privilege of working closely with Kurt in the last few years. Having met Kurt at a FASA networking function some years ago, I quickly realised the wealth of information he had on franchising and that OBC could benefit from the depth of this knowledge. What started as a business relationship became a personal friendship not only to me but many within the OBC team. “Uncle” Kurt became part of the OBC family, not only quick to advise but also to point out where we could improve. The input he provided in preparing us in becoming an award winning brand will not only always be appreciated but definitely remembered in OBC’s “Hall of Fame”. His contributions to the franchising industry and to FASA over the years were simply too many to list. The industry has lost a great man. I have lost a dear friend, a mentor.”

His enthusiasm for franchising’s unique business format never wavered. In his conclusion to his 2007 book he wrote:
“I encourage you all to embrace the new South Africa, welcome change, assume a leadership role in a specific market niche and watch it take off. Follow these guidelines and the sky will truly be the limit!”